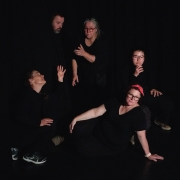 Rebus Theatre’s Playback Ensemble is touring their new show ‘At The End Of Our Street’ throughout September and October as part of Project Alchemy, a cross disciplinary arts project to build resilience across south-east Australia.

Playback Theatre is a form of improvisational theatre in which audience members tell stories from their own lives and watch as actors and musicians enact them on the spot using movement, music and words, but without script or rehearsal. It can be moving or funny according to the stories shared.